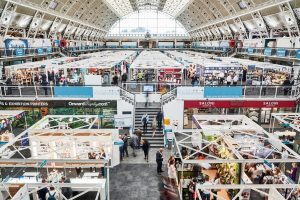 The 2018 Exclusively Show has gone beyond our expectations thanks to the continued support of all that were involved. The results are in and visitor numbers are up by an impressive 10%. There’s so many reasons we can attribute to this success, we believe its a combination of activities, but instrumental were: – a sell-out show of proactive exhibitors, the bira Bonus, the Sirius initiative, an inspiring Seminar Program, sponsored by BHETA, the growth of the Brand Showcase, and reputation of the Scarlet Opus Trend Displays. Let us explain.

Undoubtedly a show which is sold out has a huge appeal to visitors. This year’s show was packed with over 150 leading proactive exhibitors, in Housewares, Tabletop, Gifting and Small Domestic Appliances offering a myriad of new products and appealing new brands. Moreover, our 32 new exhibitors brought an eclectic mix of new products and novel brands, many of which were awarded an Scarlet Opus On-trend award.

To drive increasing numbers of Independents to the show, the Exclusively Team, sought a new partnership with bira. A combination of pre-show initiatives to appeal to independents were agreed to increase their accessibility and the awareness of membership benefits. The partnership resulted in bira taking their first stand at the show, participating in the Seminar Program and finally being instrumental in the success of the bira Bonus, the combined effort, certainly appealed to the independent trade, as reflected in the show’s attendance figures, visitors to the bira and stand, and sales of over £30k can be attributed to the bira bonus provide such confirmation.

Now in its 5th year, Exclusively Electricals is a huge draw for all of our visitors, keen to drive a new group or retailers to the show, the show team, sought out a partnership with Sirius. Sirius seized the opportunity. Having wanted to run a UK convention for some time they saw this as the ideal place, offering their invited retailers; company updates, new initiatives, talks from approved suppliers and a seminar from Exclusively Show’s Trend Forecasters, Scarlet Opus. The result, was an increasing number of retailers visiting the show, 90% of which were new to the show, confirmed Steve Jones, Commercial Director, who not only attended the convention but took time to shop the show. He continues “The size and array of suppliers is very extensive and just right with something there for everyone. Having it spread over two days ensure there is enough time to see everyone they need to and explore other opportunities”. 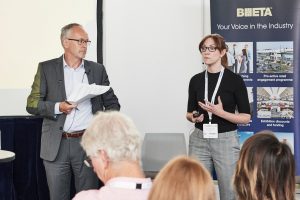 The reputation of our Seminar program, sponsored by BHETA, builds. Each year we look to introduce new speakers, in addition to inviting speakers to return. This year’s program included:
 – GFK, with market updates.
 – Scarlet Opus, highlighting the trends in housewares sector over the next couple of years.
 – A Panel discussion with Bira, covering issues faced by the Independent Trade.
 – Nett Visibility – offering advice on where to advertising online.
 – Good Housekeeping – The value of the Good Housekeeping to today’s consumer.
The Seminar Program was well received, returning the largest turnout in recent years, in some seminars there was standing room only!

The Brand Showcase now in its second year is rapidly becoming a mini show in its own right. 2018 saw the doubling of brands participating and a record number of quality journalists attending.

Key for every exhibitor, is to launch products that are on trend and that will appeal to today’s savvy customer’s. Hence the Trend Talk by the Show’s Trend Translators is one of our most popular seminar programs and The Trend Displays orchestrated by the Scarlet Opus Team from exhibitor’s products are always busy. Moreover, prized by our exhibitor’s is the accolade of receiving an on trend or two. To see which products received the 2018 awards please take a look at your Catalogue but many can be seen in these pictures. We believe this is a key pull for retailers and exhibitors and a unique aspect to all visitors to Exclusively Shows.

Our International Visitors were welcomed again. The number of International visitors, bother buyers and retailers grew. On the Eve of the show opening, BHETA hosted a drinks reception and extended the invite exhibitors. The turn out from Exhibitors was excellent and the best in recent years, resulting in many exhibitors recording follow up visits to their stands over the following two days. 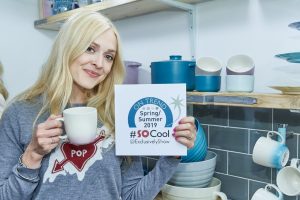 A smile can say a 1000 words. We think that positively sum’s up Fearne Cotton’s appearance, (the popular presenter, DJ and cook book) and her presence on the Swan Stand – EH400 to launch her new Collection, “Fearne By Swan Housewares”. They say about the collection; Whether you are a whizz in the kitchen, style aficionado or baking fan, the new “Fearne By Swan Housewares” range promises a beautiful and practical collection of accessories and cookware.

In summary, there were so many contributions which drive new buyers to the show, but we believe the comment below from Martin Elliot, Chief Executive of Home Hardware sums up this up.

We had an excellent show and did some good business with existing suppliers and also found some new suppliers, which we believe is a vital part of attending Trade Shows. There appeared to be a positive buzz to the show with supplier’s keen to maximise future opportunities together. Thank you once again for your very kind hospitality, which is greatly appreciated.

The Show team were delighted with the mix and quality of retailers that attended. The show embraced many new retailers who are championing new and evolving routes to market, alongside large respected high street names and of course are determined Independents, embracing change from all corners of the UK.

Thanks for making this Show the UK’s Premier Showcase of Housewares Tabletop and SDA’s.