A ground-breaking company set up at the height of the financial crisis and inspired by the new make-do-and-mend culture has won two Queen’s Awards for Enterprise, for both innovation and international trade.

Only five firms won two awards announced by HM The Queen on her 91st birthday, and MastaPlasta Ltd is the smallest and youngest firm to be given the prestigious dual accolade. It was also the only firm in London to receive two awards.

When the banking collapse of 2008 hit the retail furnishing sector, the furniture design founders of MastaPlasta spotted a gap in the market for high quality patch-and-mend solutions for thousands of people desperate to keep much-loved items of furniture which had suffered minor damage.

Homeowners and businesses whose sofas and chairs had suffered tears, spills or burns have always struggled to find a cost-effective way of repairing their cherished piece of furniture.

MastaPlasta, based in North London, developed a highly durable leather repair patch, in a range of styles, backed with pressure-sensitive adhesive, which has also been used in cars, on leather clothing, handbags, in motorboats and aircraft, as well as on horse riding and motorcycle saddles.

Now the pioneering patches are selling internationally from the US to Guam, and Alaska to Germany. Over the past five years, turnover has grown tenfold with massive interest in the US and Europe, and MastaPlasta has based its success on using UK suppliers throughout the manufacturing and packaging process.

Many homeowners and small businesses use distinctive designs to make a fashion statement with their repair work, which can restore a £2000 sofa for less than a tenner, instead of hundreds of pounds in repair costs.

Stephan Pavlou, one of the founders of MastaPlasta, said: “We have shown that even in the most difficult market, there are opportunities for British companies. It is just incredible and a great honour to have that innovation and international growth marked by The Queen in this way, and we are optimistic about further growth overseas.” 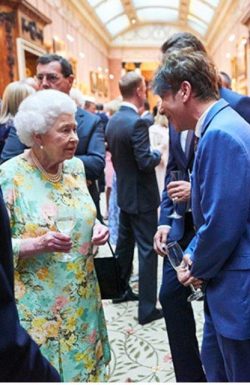 Donna Clarke, co-founder, added: “We saw an overnight collapse in sofa sales, but we knew from experience that many people wanted to keep their existing furniture – there just wasn’t a reliable way of patching up any damage. It started as an experiment for our own customers but just took off.”

The pair caught the Queen and Duke of Edinburgh’s attention at a celebration of the awards at Buckingham Palace in summer, and at an Institute of Export dinner in September, they chatted with Princess Anne. As President of the Riding for the Disabled Association, Her Royal Highness was interested to hear how their MastaPlastas have been helping mend RDA saddles.

Earlier, the MastaPlasta co-directors were presented with the two trophies by the Queen’s Deputy Lieutenant Ann Cable MBE at a ceremony at the bandstand in Broomfield Park, Enfield, attended by the mayor and chief Executive of Enfield.

The surfaces of some of the MastaPlasta patches are embossed with designs and have an engineered pressed edge that make it look less obtrusive. But some novel designs, including skull and crossbones and the Stars and Stripes flag, have enabled the patches to be used as a feature rather than aiming to be invisible. Such a simple but effective product had never been thought of before and MastaPlasta has been granted a patent to cover the intellectual property within the brand.

The Stars and Stripes flag design and the US national symbol of an eagle have been successful in the States, while the image of a Crown has been popular worldwide, alongside plain designs in 10 colour options. In the UK, a ‘sticking plaster’ design and the ‘skull and crossbones’ pirate symbol have been especially popular.