BHETA and bira Tussle it out on the Turf 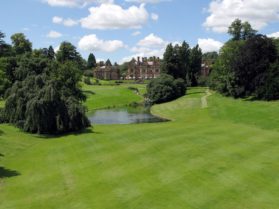 BHETA and bira Tussle it out on the Turf

The industry’s two leading trade associations The British Independent Retailers Association (bira) and British Home Enhancement Trade Association (BHETA) will come together again to present a friendly but, competitive networking, business and social occasion in the calendar by way of the ‘Tussle on the Turf’ golf event. The event is to be held on July 19th in Stratford-upon-Avon at The Welcombe Golf Club.

The bragging rights currently sit with bira who ran out winners of the inaugural event last year. So, the gauntlet is thrown down as the independent DIY, hardware and cookshop retail members of bira will battle it out again for the spoils and honours with DIY, hardware and housewares supplier members of BHETA.

Set in the backdrop of the neo-Jacobean mansion, the Welcombe championship standard 18-hole course is nestled in 157 acres of Warwickshire countryside: an undulating verdant landscape in the heart of the country. This par-70, 6,288-yard championship course is home to lakes and rolls seamlessly through the hills of Warwickshire and provides a tricky round for players of all abilities.

National bira President Vin Vara will lead out the retailer teams to defend the handsome trophy they picked up last year yet, the overriding objective of this initiative is to forge tighter relationships between the two associations and their members and to better understand each other’s needs to a mutually rewarding business relationship going forwards.

Sarah Golden, Marketing & Membership Director at bira says: “We are always looking to strengthen our members’ relationships with suppliers and this friendly inter-association golf competition is a great opportunity for both to build a better understanding of each other.”

Executive DIY Director at BHETA, Paul Grinsell says, “We’re pleased to be able to be working more closely with bira and its members in a relaxed, business and networking event. With a hint of competitiveness thrown in I’m sure, we’re pleased to be engaging with such an initiative that is establishing itself as a fixture in the calendar.”
Retailer and supplier teams of four are invited to participate in the event.