A busy show season for BHETA and its members 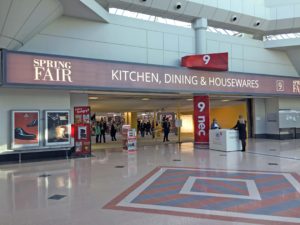 A busy show season for BHETA and its members

So many BHETA members find their February dominated by exhibitions whether that’s Spring Fair, Ambiente or Totally – or some combination of the three! Here is our view on the shows we’ve just experienced – and one of the most important shows to come.

Most members seem to think that this year’s exhibition was ‘reasonably good’ with a few interesting new initiatives. Overall we saw most of the big retailers visiting the halls in some strength, but a definite downturn in the numbers of independents, which is a great shame. One apparent positive – albeit it’s early days was the new DIY hall where some big and influential brands such as Akzo Nobel and L G Harris had stands and several other member exhibitors reported good levels of orders. BHETA was also involved in sponsoring the Kitchen and Dining category of the new Gift of the Year initiative. With today’s imperative being firmly on the importance of exploring new markets, ‘giftability’ is a great opportunity for many traditional home and garden suppliers. Whether it’s kitchen and tableware or garden and DIY tools or plants, the gift market has great potential and may mean little more than the repackaging and remerchandising of traditional products.

85 BHETA members exhibiting and a great show with loads of atmosphere, customer and prospect relationships and actual order taking from both export and home customers. The show reinforced not only giftability and the importance of experiential marketing opportunities to engage customers, but also the timeliness of exploring new markets at home and abroad. Export is an obvious potential winner, but so are alternative home markets such as commercial hotel and hospitality.

Another great win for BHETA’s sponsorship of the Totally DIY & Tools Show’s Innovation Zone. Patlock is the home security product and visual deterrent for French Doors. Designed and developed in the UK to deter and stop would be intruders. Patlock has gained SBD accreditation and now another award for its presence in the BHETA sponsored Innovation Zone.

BHETA is to sponsor an exciting new programme of content at this year’s Exclusively Housewares and Exclusively Electrical Shows, all dedicated to exploring the latest predictions for consumer trends for Christmas 2017 and going forward into 2018.

This year Exclusively is adding a new feature, ‘Tomorrow’s Kitchen’ to its visitor offer, which will be created on the Atrium level of the Gallery Hall. Designed to appeal to visitors of both Exclusively Electrical and Exclusively Housewares, its aim is review the latest technological, lifestyle and design advancements within the domestic kitchen, and look ahead to what the future holds.